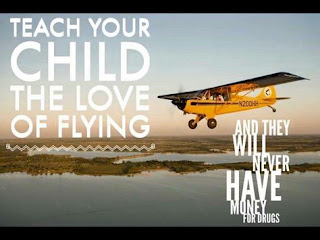 There's a cute meme, "Teach your child the love of flying and they will never have money for drugs."

Flying for me is a bit like a drug, when I fly I am happy. I'm in a good mood for the rest of the day. The next day I want to go up again!

My CFI used to say I was like a kid at the amusement park, always wanting to jump back in the line the moment I got off the ride to go again and again and again.

Over 2000 flight hours and 10 years later I'm still that kid in the amusement park, wanting to go up again and again. If I can not go up I am restless and annoyed that I cannot do my favorite thing. I flew yesterday, doing an IPC with that same CFI. Today I want to go again!
Posted by Nissa at 11:19 AM 1 comment:

Email ThisBlogThis!Share to TwitterShare to FacebookShare to Pinterest
Labels: joy of flight

When All Else Fails, Try Another Day

I'm working with several private pilots now on their instrument ratings. One of them, Sam, is on the verge of finishing his rating... as is typical, he has to finish his written(!), needs to get comfortable and consistently competent handling multiple approaches at multiple airports in quick order and we need to do the required IFR dual cross country flight. This flight has to be at least 250NM cross country flying IFR "in the system" with three landings and three different types of approaches.

I devised a plan of three airports and three different approach types only 277NM (straight line distance). The VOR 19 at Paso Robles, the ILS at Castle AFB and last the GPS Z 31R at Reid-Hillview. We had the plane for today.. the weather looked good, if not great, and everything was good to go. Well, it was good to go as of Thursday mid-day anyway.

Thursday night I get a text. A private pilot student says he needs the plane we had reserved Saturday for his check ride. I've received many many texts like this before and 9 times out of 10 the person ends up not doing the ride. So I told him we wouldn't give up the reservation but if he actually was ready to go and the check ride would happen of course he could take the plane. Late Friday night I get the expected text that he wouldn't be doing the check ride. We were good to go again.

I get up and feel better than I had all week as I was recovering from a cold. I check the flight plans Sam emailed to me. I notice the first flight plan had San Lois Obispo indicated as an alternate. Hmmmm... the previous night Paso Robles was forecast to be VFR or at least high enough ceilings to do the VOR approach. I looked at the weather and Paso had ceilings below 200 feet and < 1/4 mile visibility and it wasn't forecast to get better. I messaged Sam told him to just file SBP instead of PRB since we knew PRB wasn't an option.

When I get to the airport Sam was ready to go, except he forgot to change the flight plan for the leg to Castle now that we were going to a different airport. No problem, he could cancel the plan and we could re-file once we got down there.

Then in a final scan of weather conditions I look at the satellite combined with the current conditions and realize 3/4 of the route to SBP and all of 7/8 of the route from SBP to MER was currently and, on a quick check of the TAFs, was forecast to be below minimums for the ILSs available on the route. The high pressure system that made this a great flying day also capped the fog and that, combined with calm winds, met the fog was not going to burn off as normal.

I told Sam it's not a great idea to fly over an entire 100s of miles over a couple valleys socked in with fog so low that you can't land an instrument approach - in a single engine airplane. We would have no options if we had an issue that required a landing en-route.

Not to be deterred we decided to try a northerly route. Santa Rosa to Chico to Reid-Hillview looked promising. Plenty of airports with plenty of approaches well above minimums along the route, more than enough distance, this would work! Sam cancelled the other flight plans and filed a new one going to Santa Rosa. We'd try for the ILS and take the VOR if we had to. We were good to go!

We get in the plane, it starts up strong. Get the weather and we're ready to go... Sam radios ground and as he starts his call it goes from very clear to broken and unreadable. I see the TX light flashing in time with the broken sounds coming from our plane. Ground said they didn't understand. He tried again with no difference. I do the call and my radio works great so we get our taxi clearance and I tell ground that we'll troubleshoot the issue with the other radio. I joke with Sam that I could do all the radio work - but we both know that's not a great idea. The last feature of my cold is a the occasional coughing fit - not something you want flying IFR in the system.

As we turn onto the taxi way I was thinking, we had a lot of issues and we haven't even gotten off the ground yet, maybe this is not a good day to fly. I said to Sam, "I'm thinking of invoking the 3 strikes rule." He let out a breath of air he seemed to be holding in and said, "I'm glad you said that. I was thinking the holes in the swiss cheese are starting to align." We agreed to see what the radio did in the run up before making a final decision.

We got to the run-up and before doing anything else Sam fiddled with the mike switch to see if he could get it working again. His first test call worked for 75% of the call. I had him to it again and it was broken and unreadable again. That was it. We decided today is not our day. I radioed ground and got permission to taxi back to Squadron 2.

A beautiful flying day wasted. Or was it? Who knows why things happen the way they do. If there's one thing I've learned in aviation its do not try to force the issue. We have 4 alternate schedules set up for the required cross country flight. ONE of them will have to work. I hope. The initial forecast for our first attempt doesn't look great... but you never know what a week will bring.

When All Else Fails

It never fails... whenever I work on a new certificate or rating (I'm working on my 6th now), I reach a point where I struggle with something and get frustrated. Good for me, I've been reaching that point quicker and recognizing it sooner with my recent efforts than I did for Private, for instance.

I'm working on my Multi Engine Commercial certificate now and as usual, hit that frustration point earlier this week. Struggling to master a task and failing mightily. In the after flight debrief my CFI was telling me what he thought the issue was. I argued with him. I thought the issue was something else. I left frustrated and annoyed. 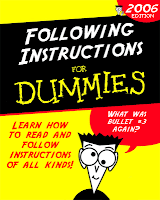 The usual thoughts were floating through my head. "I'll never be able to....", "I should be better than this!", etc. etc. But as the evening wore on I started thinking about what my CFI was trying to tell me. And, while I still didn't necessarily agree with him, what I was doing certainly wasn't working. Maybe I should just stop thinking about it and do what he tells me. I figured it certainly couldn't be worse than what I was doing, and would probably be better. After all, he's been doing this for much longer than me with a much better track record of success.

We met the next morning and sat down to discuss the plan for the flight.
CFI: "Any thoughts or suggestions before I DICTATE what we will be doing today?"
Me: "I thought about this long and hard last night. You've been doing this a little more than I have so I figured I'm best off just doing what you tell me to do."
CFI (blink, blink): "OK then."

He proceeded to outline the plan for the flight. When we were walking out to the plane I asked him, "You were ready for a fight weren't you?" He was. And he wasn't going to let me hijack his syllabus anymore.

The result of the flight was predictable. I did what my CFI told me. It worked splendidly and I learned a lot. So, once again, the lesson for all pilots, old and young, experienced and inexperienced, and especially me. When all else fails, do what your CFI tells you.